Should a good Christian forego meat?

Rainer Hagencord criticizes the churches for excluding animals from theology. According to Hagencord, humans can also encounter God when they meet animals. This point of view is linked to conflicts in the Münsterland, which is considered to be the heart of the German meat industry.

DW spoke to Rainer Hagencord about meat, guilt and morals. A longer version of the interview can be heard on the English environmental podcast "On the Green Fence".

DW: Over 750 million animals are slaughtered in Germany every year. You say this is problematic from the Christian perspective. Why?

Hagencord: As a theologian, I say that our system of industrial meat production is based on structural sin. We must not blame everyone, we must focus on the system that makes us guilty. In this system everyone loses: our earth, air, animals, water, biodiversity, the global south, the workers. The only winners are the meat and pharmaceutical industries. A theology that elevates man as the crown of creation and reduces nature to a resource store is jointly responsible for this ecological catastrophe. 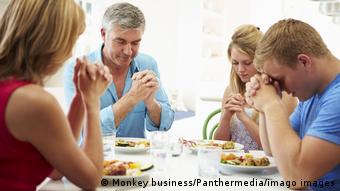 Ecology plays a central role in their sermons. How do you deal with the meat eaters in your community?

I experience again and again that many people here in the Münsterland are not familiar with the system of industrial animal husbandry on this scale. Many still do not know that the rainforest is being cleared because the hunger for cheap meat cannot be satisfied in the industrialized nations. And then of course I touch on the question of guilt. When it comes to the system, I'm just as guilty.

Which system do you mean?

Germany's largest meat producer Tönnies is less than 30 kilometers away from us. And through the Tönnies scandal, not only was the whole misery of the animals present, but also the misery of the people who are kept there as slave labor. I know of many people who get sick and depressed because of their work. When I treat animals as if they were brutes of the meat industry, my own soul is brutalized, something in me withered.

I see it as my task to make this clear. And this is where my donkeys [kept on the institute's premises] come into play. I am fortunate that I often celebrate church services with groups that have been with the donkeys before. These people can then do much more with the biblical word that animals are in league with God. Many then think of their own experiences with animals. Then I often experience deep dismay. Many then say: "I have never seen it that way, that my meat consumption has something to do with my Christianity." 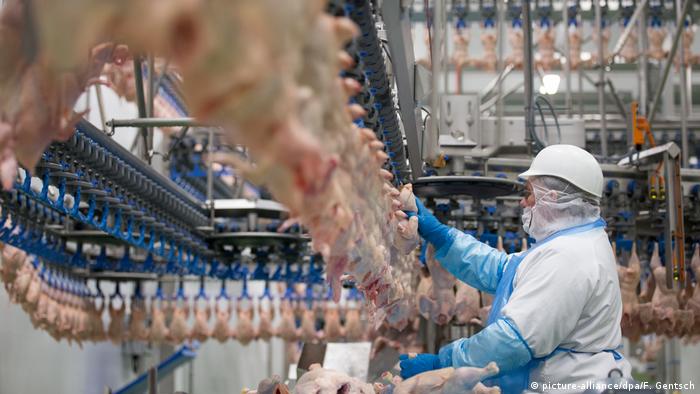 According to Soko Tierschutz, temporary workers in the meat industry often have to work more than 60 hours a week - without wage compensation

Read more: Insider on factory farming in Germany: "The conditions are catastrophic"

We love animals. At the same time we kill them to eat them. How can we resolve this paradox?

The Bible has a very nice story about it, the Garden of Eden and Adam and Eve. This narrative shows that we cannot live as human beings without becoming guilty. Our place is beyond Eden. However, the animals were not driven away. They are moved directly by God, a God immediacy that we humans have lost. Humans are the only beings who have to ask themselves: "Do I want to be moved by God, or do I want my own egoism?"

And what does that mean for the meat eaters among us?

We will never escape the cycle of living at the expense of other lives. Guilt is therefore a fundamental constant in our life. In contrast to animals, however, humans have a choice. We can refrain from eating meat and thus strive for a more non-violent existence. For me, there is no longer any moral argument in favor of meat consumption. 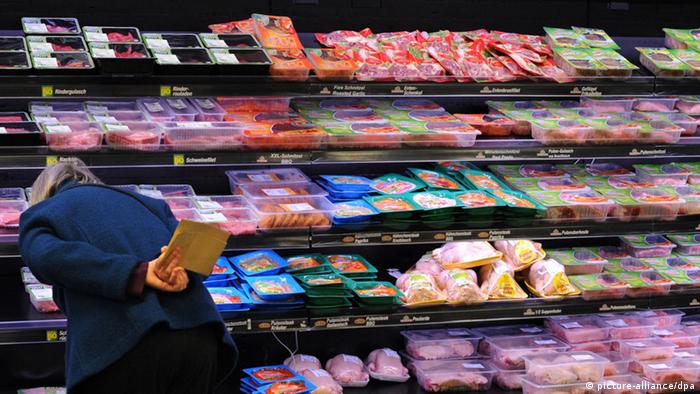 According to the Federal Statistical Office, sales in the slaughterhouse and meat processing industry were 42.5 billion euros in 2019

Does that mean you can't be a good Christian if you eat meat?

I actually see this problem. But I don't tell anyone what to do or what not to do. The church has acted as a moral authority for far too long. I just want to collect and present facts. As a theologian and God-seeking person, however, I can no longer understand in the long run how a religion that has made mercy, solidarity and empathy on the banner masks this from animals.

Read more: Meat industry: worth billions and under pressure

Christianity follows the example of Jesus. Do we know if Jesus ate meat?

We know that after the resurrection, he met his disciples and ate fish. We cannot say from the Bible that Jesus was a vegetarian. He was too much too involved in the agrarian culture of his time for that. But let's look at the sacrament. It was the Jewish Passover festival. This festival sees the slaughter of the lamb as a religious act. But what did Jesus eat in the Lord's Supper? Loaf! No meat. And so Jesus stands in the tradition of the great prophets who believe in a God who wants mercy and not sacrifices. Historians say that the Temple in Jerusalem was a huge slaughterhouse on certain festivals. That was a big economic factor. The whole religious caste, all of Jerusalem, lived from such slaughter festivals. And then this man from Nazareth comes and says: "What you are doing is blasphemy!" And that's why he had to go. 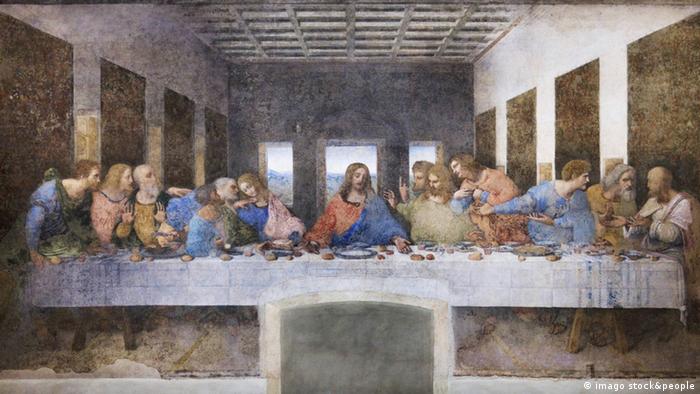 At the Last Supper, Jesus Christ did not eat meat but bread. No coincidence, says Rainer Hagencord

How do other priests respond to their message?

I've heard it all. Some colleagues say: "What you are doing is unbearable, you are leaving the soil of our Roman Catholic theology." And others say: "Finally a prophetic voice."

And what does the bishop say about it?

The bishop released me for this work. And he thanked me for raising my voice. But he also said that people who work in agriculture and lobbies keep asking him to suspend me. Apparently many people are leaving the church because of me. 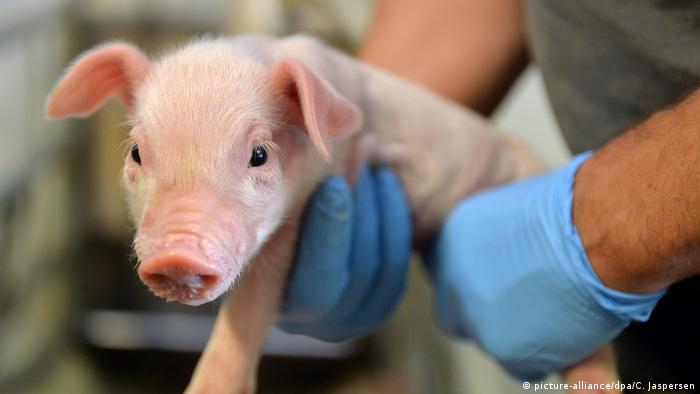 According to the meat atlas, the annual meat consumption in Germany is around 60 kilograms per capita. Every German devours around 1000 animals in their lifetime.

We are in a region that has been shaped by the fattening and meat industry for generations, but at the same time it is a very Catholic region. This means that there are hardly any parishes in our diocese that do not also have people who work in this system. Many are initially upset when I, as a priest, emphasize the intrinsic value of animals. A woman once said to me: "If I go into the barn with the sentence 'My pigs have a dignity', I can no longer do the work. But I have to do it." That touched me very much.

Read more: World Vegetarian Day - Who is behind the veggie brands?

You are a vegetarian but not a vegan, so you eat dairy products. Calves are slaughtered as a by-product of the dairy industry. Does that bother you?

Yes it does. But I find it very difficult to do without milk and cheese. I am guilty of that too. I'm in a big conflict because I know I'm wrong and I want to get away from it. Therefore, as a priest, I would never point my finger at others. And there I am biblical again and think of Paul, who says in Romans that all creation is waiting for redemption. I am a guilty person. And I live with animals that are not. That increases my respect for them. When I meet animals at eye level, I know that they have emotionality and social competence. Then the brotherhood of animals comes closer and closer to me. And then at some point I'll say: "I don't want to eat my siblings anymore."

As a Catholic priest, Rainer Hagencord heads the Institute for Theological Zoology in Münster. In addition to colonies of bees, two donkeys, Frederik and Fridolin, live on the site. They are involved in seminars on encounters with nature and also inspire church services.

The interview was conducted by Gabriel Borrud and Neil King