How many strange places are there on earth

12 of the strangest places on earth

The earth is a strange place.

1. There is one town in Pennsylvania that has been on fire for 56 years: 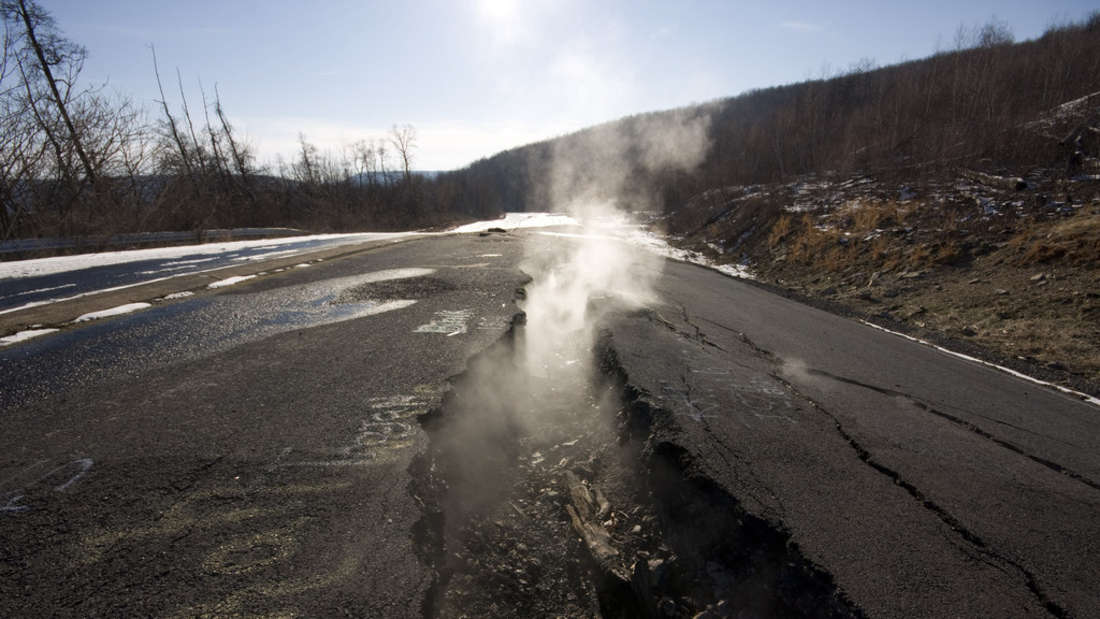 A coal fire broke out in the ground under the community of Centralia in the US state of Pennsylvania in 1962. It wasn't a big problem at first, but by 1981 potholes began to appear on people's properties, full of hot steam and deadly levels of carbon monoxide. In the mid-1980s, the government intervened and relocated the residents of Centralia. The municipality, which had 2,449 inhabitants in 1940, shrank to 7 inhabitants in 2013.

The fire is expected to burn for another 250 years.

2. The smallest park in the world has a diameter of 60 centimeters. Yes, centimeters! According to Guinness Book of Records Mill Ends Park in Portland is the smallest park in the world. Over time, people have left quite a few items for decoration in the park. Planted flowers, a miniature ferris wheel, a butterfly pool and plastic soldiers (during the "Occupy Portland" protests).

3. The narrowest street in the world is in Baden-Württemberg: 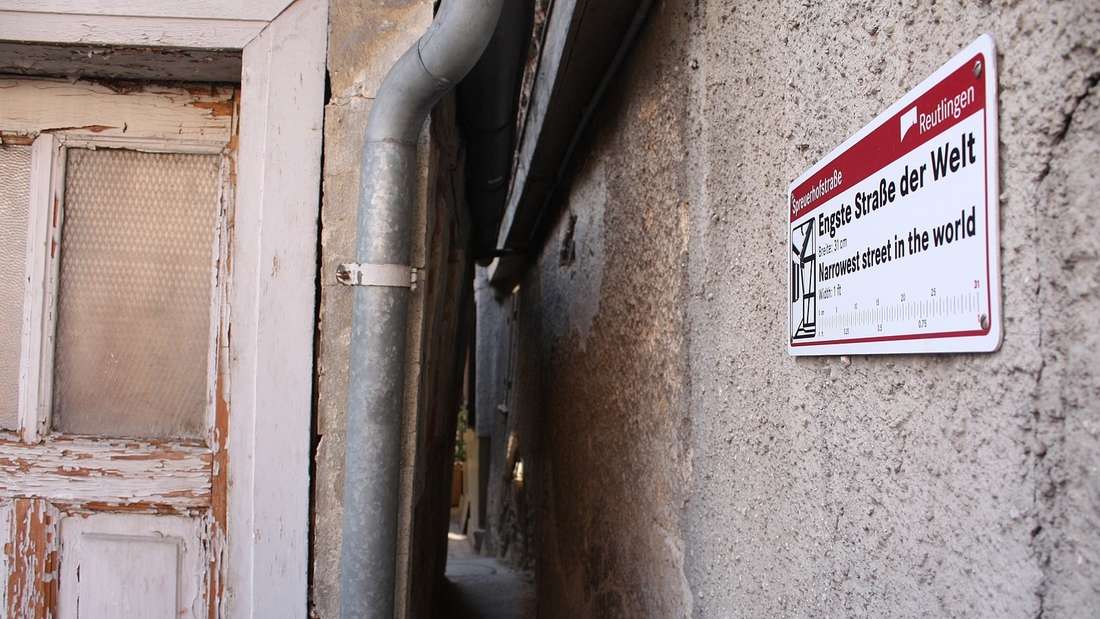 The Spreuerhofstrasse in Reutlingen is considered to be the narrowest street in the world. Their width is between 31 and 50 centimeters. The alley dates back to 1727. Claustrophobics are advised not to enter.

4. This is a land that doesn't belong to anyone:

In 1902, the United Kingdom laid out borders for Egypt and Sudan different from those drawn in 1899. Therefore, two areas were controversial: Bir Tawil and the Hala'ib triangle. Both Egypt and Sudan claimed the Hala'ib triangle because of its rich natural resources. The Bir Tawil, on the other hand, had nothing to offer. So it was not claimed by either country. The Bir Tawil is thus an area without land.

5. This little triangle in New York belongs to a family that has refused to give it to the city since 1922: 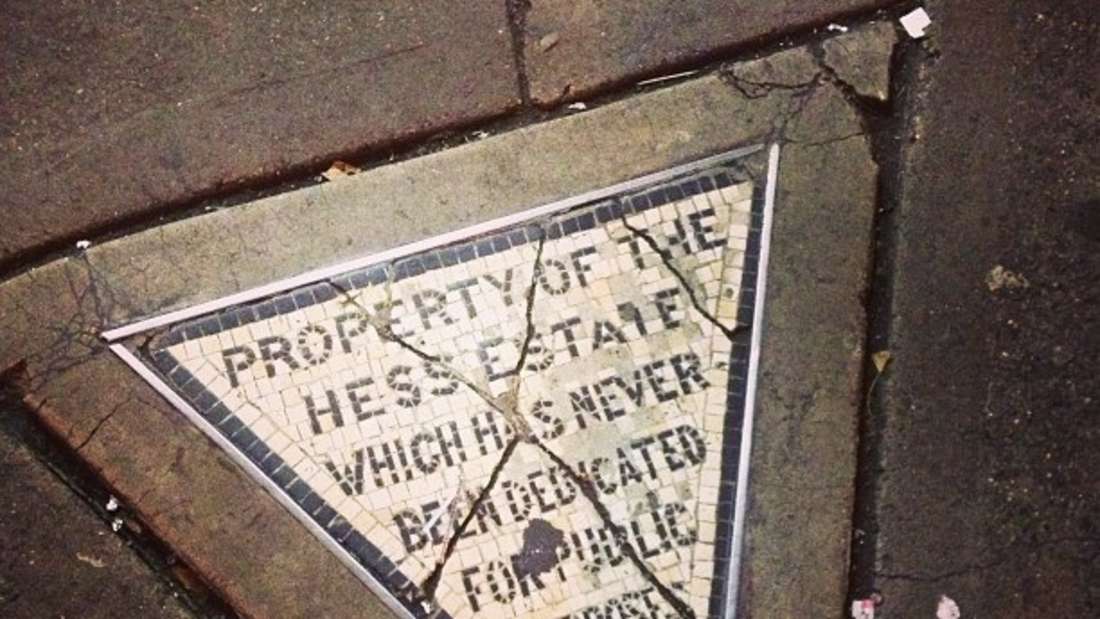 In 1910, the City of New York took over and demolished several properties in Greenwich Village to widen Seventh Avenue and make way for a subway extension. In 1922, the heirs of the Hess estate became aware of a measurement error that gave them the right to a tiny triangle measuring 70 cm × 70 cm × 65 cm. They then had a small mosaic laid on the tiny piece of land.

It says: "Property of the Hess estate, which has never been released for public use."

The city asked the heirs to let her have the small property, but they refused. The mosaic is still there today.

6. The city of Monowi in Nebraska, USA has only one inhabitant: 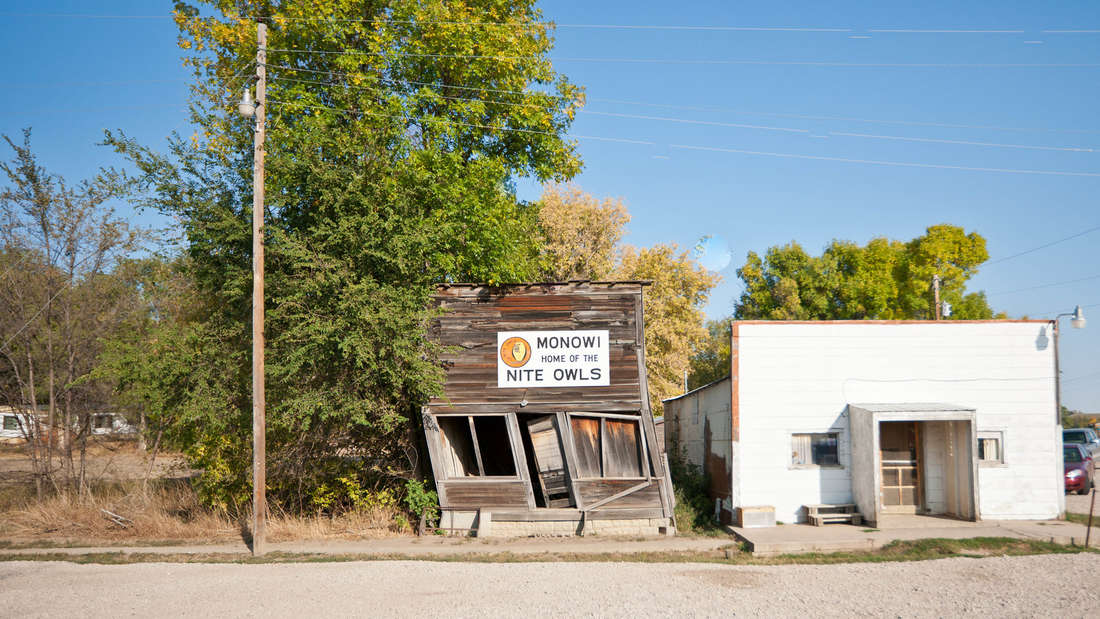 A census in 2000 found that Rudy and Elsie Eiler were the only two residents of Monowi, Nebraska, United States. And when Rudy died in 2004, Elsie was the only resident. She is currently the mayor of the city and has granted herself a liquor license.

7. In Iceland, a shower just stands around in the great outdoors and runs day and night: 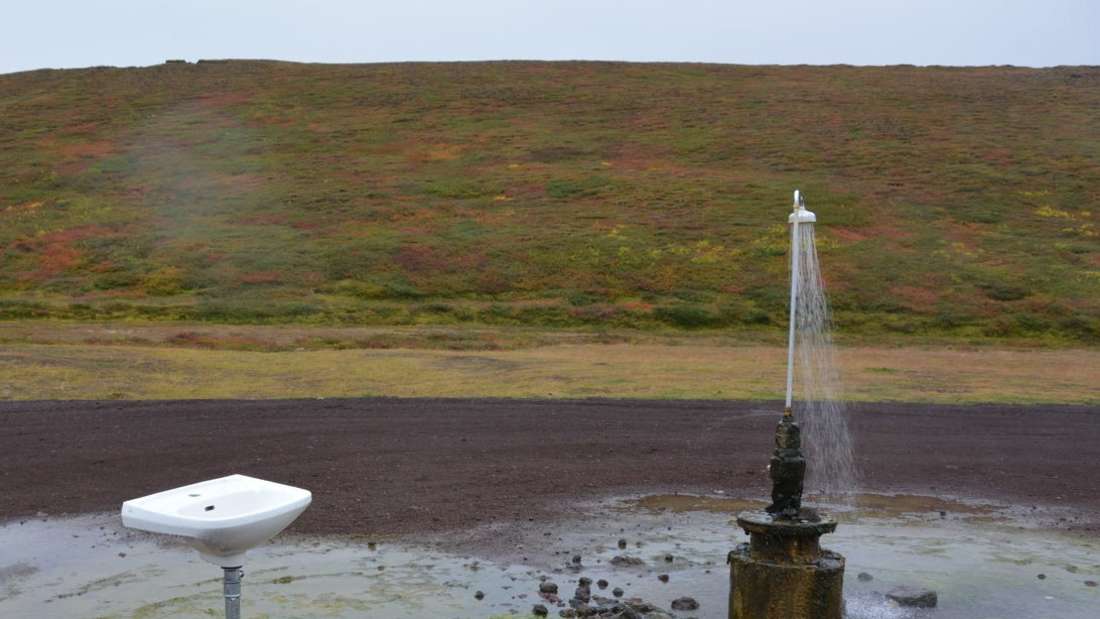 There is a bathroom without walls near the geothermal power plant in Krafla, Iceland. The "Krafla toilet" is directly connected to a thermal spring and therefore warm water constantly flows through the shower. The toilet, after which the place is popularly named, has since been removed.

8. There is a vending machine in Seattle where you never know what kind of can you will get:

The “Mystery Coke Machine” in Seattle's Capitol Hill neighborhood spits out “mysterious” beverage cans for 75 cents. The machine has been there for over three decades and nobody knows who it belongs to or who fills it. As a spokesman for the city administration says, “there are no permits for the machine”. The mysterious machine also has its own Facebook page.

9. This wall has been covered with chewing gum since 1993: 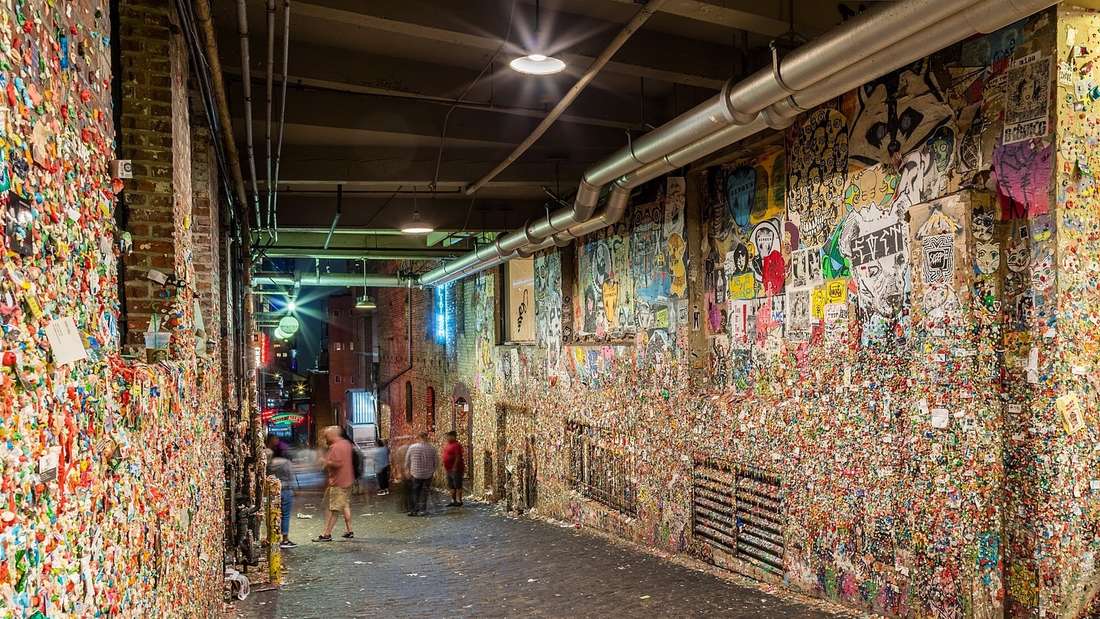 The gum wall at Seattle's Market Theater is "part interactive art exhibit, part public health" and has been in existence since 1993. While visitors to the theater queued to see an improvisational theater group, they stuck their chewing gum to the brick wall. The wall was 2.50 meters high and 15 meters long. Around 150 chewing gum stuck to each brick - some for decades. The wall was first scrubbed in 2015 after the sugar contained in the chewing gum began to erode the bricks.

10. This cafe has one entrance in Canada and one in the US: 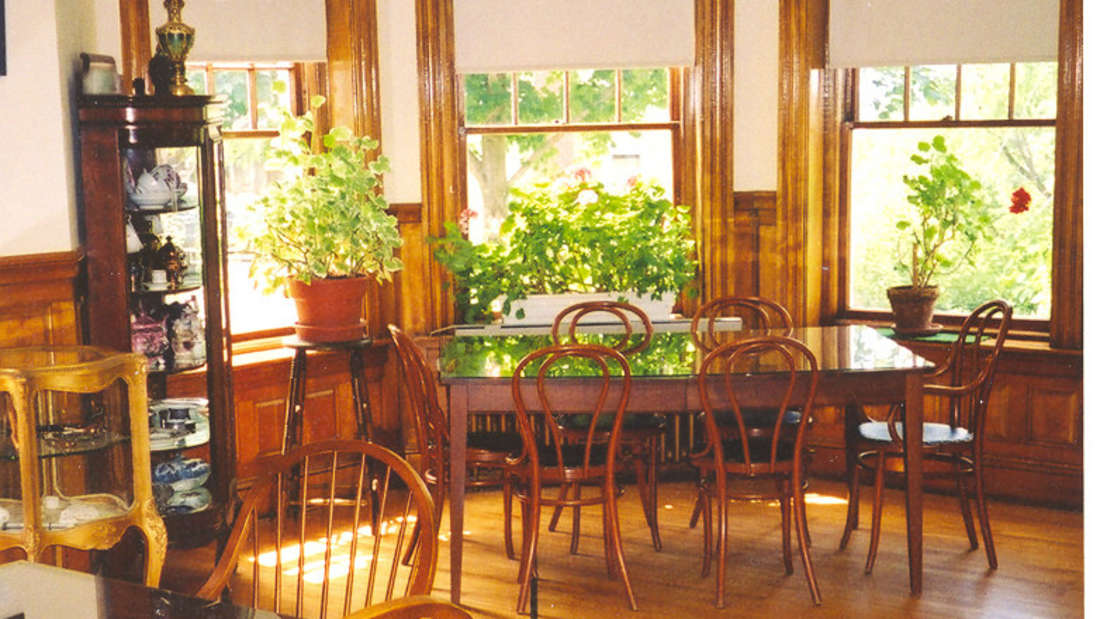 The Haskell Free Library and Opera House is a house that sits right on the border between Canada and the United States - in Stanstead, Quebec and Derby Line, Vermont, to be precise. The building has 2 entrances: one for Americans and one for Canadians. A thick black line on the floor marks the limit.

11. The German city of Staufen is literally bursting at the seams:

The city of Staufen im Breisgau is a wonderful vacation spot, but: It is falling apart, in the truest sense of the word. Since 2007 the ground has been swelling due to unsuccessful drilling work. Even experts don't know how to stop the swelling that is still damaging many buildings.

12. This café only cost its owner a paper clip: 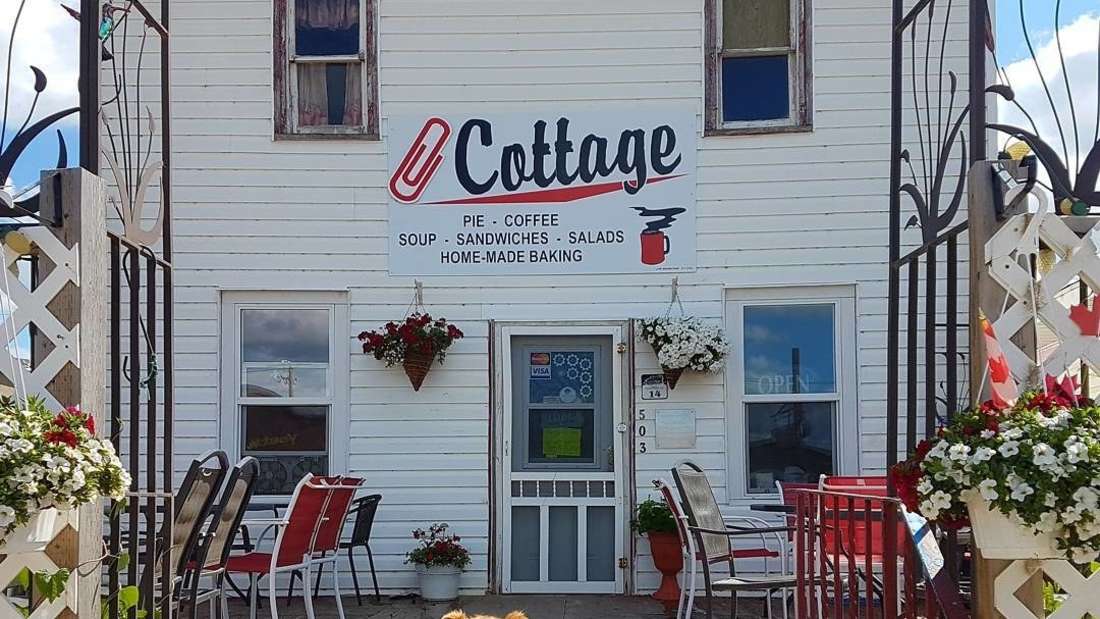 The Paperclip Cottage café in Kipling, Canada has an interesting history. In 2005, Kyle McDonald owned a red paper clip and traded it for a pen. Then he traded the pen for a doorknob. The barter business continued, got bigger and better: an espresso machine, a camping stove, tickets to the Canadian Rockies, and so on. A year after McDonald made its first swap deal, he owned a two-story house. He sold the house to a restaurant owner. He turned it into a café that is still reminiscent of McDonald's barter deals.

This article first appeared in English.

Even more notable places on our planet:

- 21 fabulous places in Bavaria that don't even know Bavaria