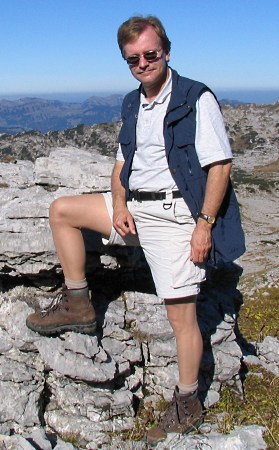 Definitely yes - why not?

In various e-mails I could read from time to time: '... it would be nice if I could wear my tights openly ...'. This wish is of course understandable, why not? And further: '... but society does not accept it ...'. Is it really like that?

For understandable reasons, most men do not dare to go out in public like this. They are afraid of possible reactions, they are afraid of their own imagination. And that's more of the point: you believe that there must be a reaction after all.

But let's be honest: Who would tell someone else that they wouldn't go out on the street like that, e.g. because the ar ... Hardly anyone. This can happen sooner in close circle of friends, but even there such a threshold is relatively high.

In my more than 20 years in which I wear fine stockings with shorts in the summer months, this has never happened before, just around the back. Sure, every now and then someone looks, turns around, maybe he's having fun too. But I haven't noticed anything else yet.

Good - wearing tights open with shorts still requires a lot of self-confidence even nowadays. And whether it is easier today than, for example, in 2000, I can no longer really judge. I only know that I have not regretted this step, on the contrary. So I can only encourage you to do it.

Sure, there is still a lot of discomfort at the beginning, but that subsides with every further excursion. You get braver, safer and at some point it just becomes a normal thing. So at the beginning you look for natural obstacles, shadows or other things so that the legs can be 'hidden'. But that doesn't help, because it makes you move 'abnormally', as if you had something to hide (you actually have something too).

And so the following applies: Behave completely normally, because that is precisely what is least noticeable. Likewise, hardly anyone will get the idea and nudge everyone with their nose: 'Look what I'm wearing ...'

This means that the least noticeable are matt, shiny, matching skin-colored tights. With black tights, I don't need to be surprised if they attract attention. But even such tights are possible. It depends on the situation and the occasion.

Own "career" to openly deal with fine tights

Already in the 1990s I wore sheer tights quite often at home, so that they could be seen. My wife and children were used to the sight.

From around the summer of 2000 on, I finally got over the idea of ​​wearing fine tights in public. It wasn't a problem at all when cycling. When I went shopping, I still had my doubts whether I should really dare. But the appearances became more frequent and safer.

In the years that followed, sheer tights, hold-ups, fine socks and, if it got too hot, feet were used. Simple matte models turned into slightly shiny ones, which gave my (naturally) depilated legs the finishing touch.

The occasions became more and more numerous. Whether shopping, cycling, hiking or at work at some point. And that is how pictures such as the one above left, which were taken on a hiking tour in October 2005 in the Allgäu, were created. Only at second glance do the sheer stockings become apparent.

Meanwhile I just enjoy beautifying my legs with different colors and transparencies and feeling when the wind is blowing around my legs. In the same way, it is very comfortable to wear tights in the office in summer, when it is too hot with long trousers but with air conditioning.

The experiences I've had so far are that nobody really cares what you wear. Of the inevitably several thousand eye contacts, only a few people were there who I had the impression that they had discovered the tights. Their looks at my legs were clear. Most of the reactions (looks) come from children, who at first don't know what to do with them. But these are especially important because they can learn from them (if they want).

In any case, I would have been very annoyed afterwards if I had made the many appearances without tights or hold-ups. Something would be missing.

My depilated legs are no longer uncommon either. Smooth legs are increasingly common in men. Even with those where you wouldn't suspect it at first glance. The industry has caught up a lot here in recent years. Smooth legs, chest, back, etc. are straight "in".

And if your legs are smooth anyway, what speaks against delicate sheer tights? Nothing. So I'm no longer alone in this regard. Maybe in the next few years you can see men in sheer tights on the streets from time to time. It is still true: the more people participate, the sooner the habitual and imitation effect occurs and the sight is seen as normal. What more do you want? It is up to everyone to ensure more acceptance!

Even with dear relatives ...

There is actually no inhibition threshold with strangers, it is easier there. Especially in a foreign city / environment. There is already one with friends, but nowhere does it seem to be higher than with relatives. You can show anyone's legs in fine stockings, but your own mother? But strictly speaking, you should also take this step. But reactions will definitely come, and if not, then at least around the back.

Of course, strangers who discover the pantyhose will first look astonished and curious, but what the heck. If you consider what else is going on and don't care about it, then handsome, fine-stocked men's legs shouldn't be a problem.

On the other hand, it is also the case that curious glances are, in principle, also desired. Because how should other people know that there are men in sheer tights? Therefore: looks don't hurt, on the contrary: they are helpful and welcome in our minds. For me personally it is especially important that it is natural and does not look excessive.

Only when I also wear a skirt does the black tights no longer matter. That's what attracts me anyway. That means the respective tights should be chosen according to the occasion.