Football World Cup 2026: for or against Donald Trump?

A tweet is no longer just a message. A tweet can change world politics. He can make history. The world community has known that not only since this weekend, when US President Donald Trump just made the final declaration of the most important industrial nations G7 with exactly 280 characters ad absurdum. 280 characters in which he announced that he no longer supported the declaration after all. Another Trump tweet could ultimately have a decisive impact on the outcome of an election this Wednesday and how the G7 meeting could take on historic features. On Wednesday, the member associations of the world football association FIFA decide who should host the so-called "FIFA World Cup" 2026 (football has not been mentioned in the name since 1998): The USA together with Canada and Mexico, or would you prefer Morocco?

Now such an event is quite exciting and decisive per se. After all, it's about billions of euros, plus prestige and, of course, the question of how early we have to get up or how long we have to stay up in order to be able to watch the most important football matches live. In this particular case, the election on Wednesday, there is a lot more at stake.

It is the first election since that ominous, scandalous December 2, 2010, the election of Russia and Qatar to host the 2018 and 2022 World Cups. It is the first election in which there is no longer a small circle of a maximum of 24 FIFA Executive Committee members decides, but the entire FIFA Congress, i.e. all 211 national football associations worldwide, minus the four associations involved (and Kosovos, whose football president died on Saturday). It is the choice for the first World Cup with 48 instead of 32 teams, which the media only refer to as a mammoth World Cup. In short: it lasts longer, takes more stages and costs more.

Above all, however, it is a choice whose outcome sounded absolutely clear for a long time - on the one hand the big USA with its mega stadiums, a lot of sponsorship money and the best infrastructure, on the other hand the small Morocco in northern Africa - and then suddenly became very exciting. And that has a lot to do with (sports) politics.

The vast majority of the games planned in the USA

It all starts with one man: Sunil Gulati. The former President of the US Football Association is the initiator, the mastermind behind the US bid together with Mexico and Canada. The lecturer at the highly regarded Columbia University in New York is designing the title "United 2026" for the application. You want to be united - and show the world that the US can do something other than unilateralism à la Trump. 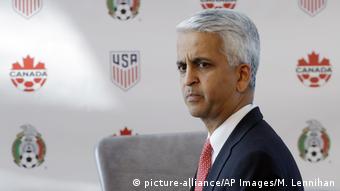 However, the application contradicts itself directly. Only ten of the 80 games would take place in Canada and Mexico, the remaining 60 and all decisive ones from the quarter-finals in the USA. It's a US application with a generous detour to the north and south. While many Canadians are proud to be a venue at all (although the 2015 FIFA Women's World Cup and the 2010 Olympics in Vancouver have already proven that they can host big tournaments), the mood in Mexico is completely different .

"It's more passionate with us"

If you ask fans on the streets of Mexico or at a game in the Mexican League, most of them are disappointed. "If you go to a World Cup together," says a fan of the Xolos, the first division club in Tijuana in northern Mexico on the border with San Diego in the USA, "then it has to be divided fairly." And another says: "The US just wants to win the sympathy of Mexicans and the world." 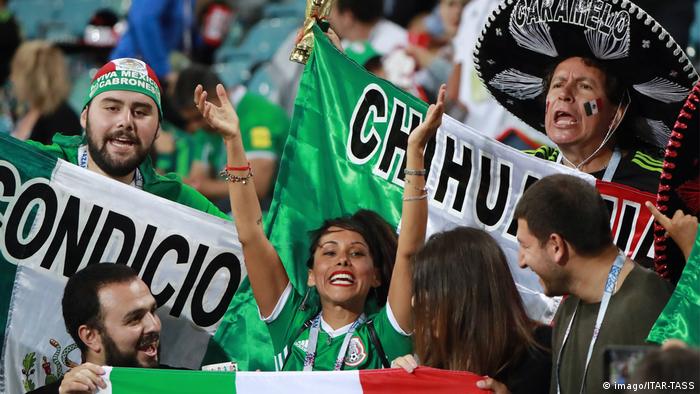 Mexico is known for its enthusiastic fans

Most fans also refer to the football history of Mexico, the venue for the 1970 and 1986 finals, which at that time were also called the World Cup. Mexico would be the first country in history to host a World Cup for the third time. "It's much more passionate here than in the USA, football is still developing there," said the head of the Xolos de Tijuana Ultras, while the noise in the stadium block almost drowned his word. "This application," he says after a short break, "forgets Mexico's football culture with the two previous world championships."

If you meet Sunil Gulati, the former President of the US Football Association, and ask him about the disparity between the venues, he only says: "We could have done it alone. Mexico and Canada would have to build new stadiums for the sole purpose of hosting." And then he honestly admits: "But of course Canada and Mexico are positive for our image. Latin America is there and Canada is respected in the world. Of course that is helpful." And then comes Morocco. And a tweet from Donald Trump.

At the last second, Morocco applies to oppose the "United 2026" candidacy. For months there was a lack of information about what Morocco actually has to offer. It is now clear: the game should be played in 14 stadiums in twelve cities. Nine of them need to be rebuilt and the remaining five renovated. Not a single one is finished. 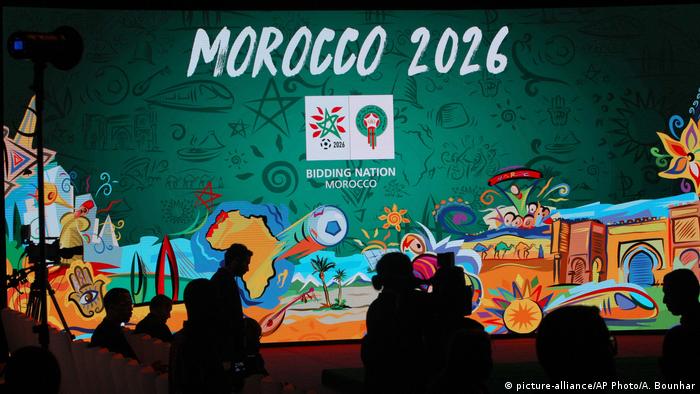 For the second time after 2010 a soccer World Cup in Africa?

The other infrastructure is also missing: Sufficient hotel capacity for a World Cup with 80 games and correspondingly many millions of fans. Training places for the 48 teams. Roads and railway networks are to be rebuilt. Even hospitals, the Moroccan Football Association openly admits in its application, still have to be built in order to adequately take care of fans and those involved in the World Cup.

Morocco plans to spend almost 14 billion euros on this. The king is behind the application. And the advantages are pointed out: All the venues are within a 550-kilometer radius of Casablanca. The stadiums can be dismantled and are more environmentally friendly than at any previous World Cup. The country is safe. And the entire tournament would take place in one currency area and above all in one time zone, the time zone of Central Europe, i.e. Germany. It is Morocco's fifth attempt to host a FIFA World Cup. Something like that is called a permanent candidate. And suddenly he has a good chance.

Beginning and end of the flagpole

This has nothing to do with the assessment of a task force of the world football association. In its evaluation report, the five-person FIFA task force rates Morocco more badly than it has ever done before. With 247.9 out of 500 possible points, they are far behind the North American application and 402.8 out of 500. And just over the limit of 200 points, below which Morocco would not have been allowed to vote in the first place.

For three points examined alone - accommodation, transport and stadiums - Morocco's application is ascribed a high risk, ten times a medium-high risk. According to the task force, there are no high risks in North America and only three medium-high risks, including the question of whether all fans are really allowed to travel to the USA, despite Trump's entry ban for Muslims in some countries. The USA has given FIFA guarantees for this.

The report states that the applications are "almost the two extremes of the spectrum". What is meant is: seldom has an application been so bad, and seldom another so good. That would be all clear. If it weren't for Donald Trump.

On the night of April 27 at 1:39 a.m., the US President, who often tweeted from his bed early in the morning or late at night, pressed 'send'. And thus changed the world around the election this Wednesday. He writes that the USA, along with Canada and Mexico, have a strong bid for the 2026 World Cup. And then he asks why the US should still support countries if they would not support them in this election.

Never before has a politician exerted such public influence on an election in world sport. From now on, every voting behavior on Wednesday is also a vote for or against the USA, for or against Trump.

And the problem for Morocco is: Wednesday's election is not secret, FIFA will then publish which football association voted and how. The question now is how many football associations see themselves as an extension of their governments or how many intentionally want to vote against Trump. So far it's completely open.

The political influence is seldom as evident as with the Zimbabwe Football Association, which wrote in a statement a few days ago that they have "naturally" consulted with the government of their own country and they are warming to "United 2026", so you vote too from about. So for Trump.

So far it is only clear that the majority of the 54 African votes will go to Morocco, as well as those from one or the other Muslim country and the votes of some Europeans who, like France, have close ties to Morocco through immigration or simply to the better time zone for their fans and set markets. It's not far to the 104 voices that you need. In the event of a tie, the application with the better Task Force rating, i.e. the North and Central America candidacy, wins. 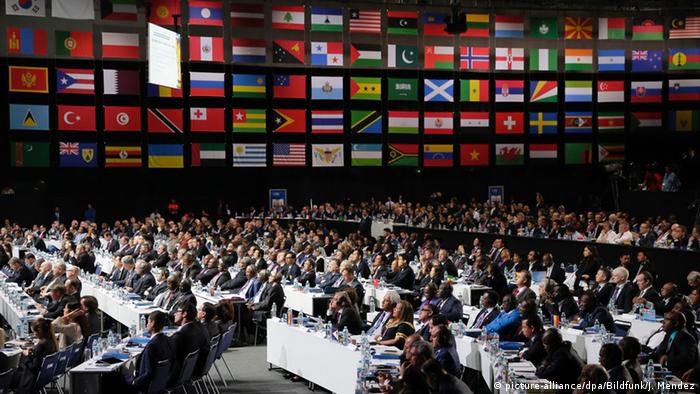 It will draw votes from Central and South America, from Asia - behind the scenes, Saudi Arabia is apparently primarily concerned with votes for its political ally, the USA, and just before the 2026 World Cup decision, it founded a new football association for Southwest Asia with 13 members - and of course those of the four US suburbs of Puerto Rico, Guam, the US Virgin Islands and American Samoa. Morocco had tried for weeks and applied to FIFA to exclude them from the election due to bias. Without success. There is a lot at stake in the election for FIFA and its President Gianni Infantino.

Finances speak for USA and Co.

The larger World Cup with 16 additional teams will also be significantly more expensive. And with money, that's just such a thing at FIFA, after Infantino, when he was elected in February 2016, promised each member association a lot more money, namely five million US dollars per four-year period. In addition, the legal fees for allegedly investigating corruption following the scandals over vote-buying and bribery of FIFA officials have cost millions. And sponsors currently seem more than cautious about pumping money into the FIFA business.

The US application, with its large market, financially strong sponsors and TV stations, is just the right thing to do. A World Cup in North America promises to raise more than 14.3 billion US dollars, writes the FIFA Task Force in its report. A World Cup in Morocco would only bring in 7.2 billion.

And Infantino owes his choice to one man above all: Sunil Gulati. You remember: the former President of the US Football Association. It was he who secured the necessary votes for him on the day of Infantino's election. A victory in the US application may be vital for Infantino if it comes to his re-election next year. 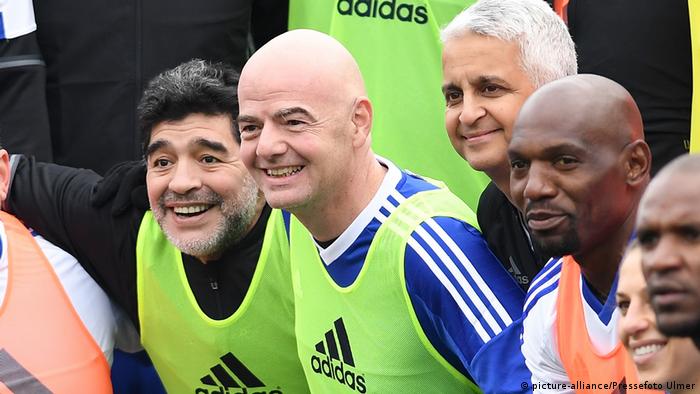 Does US investigation against FIFA play a role?

That US President Donald Trump called the Canadian Prime Minister "dishonest" and "weak" on Twitter after the G7 summit at the weekend, and that many Canadians are possibly no longer so sure whether it was a good idea to work with them Applying for the USA and Mexico to host a World Cup together may be a side note. Just like that Trump actually wants to build a wall to Mexico.

The fact that the US domestic secret service FBI and a court in New York are continuing to investigate the FIFA corruption swamp and that many football associations may not necessarily want to award the World Cup to the investigators' home country could more likely have consequences. Maybe Hope Solo will be right in the end. One of the icons of US women's football, world and Olympic champion, strongly advises against voting for her home country.