Why are Han Chinese so white

China's repressive treatment of minorities has a long tradition. The situation of the Uyghurs shows that it is high time to do something about it. 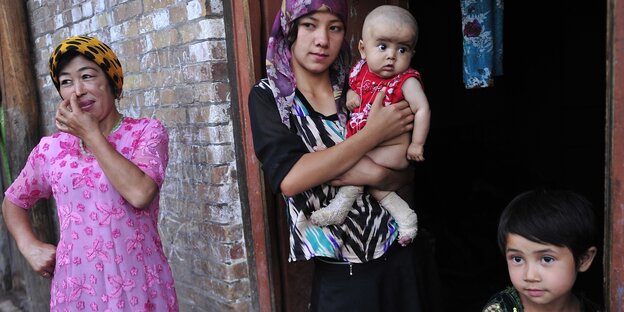 A Uyghur woman stands with her daughter and her neighbors in front of their house in Kashgar Photo: Rooney Chen / Reuters

BERLINtaz | What do you say to a crying child whose parents are suddenly no longer there? How do you answer him when no one knows where they are and when they will be back?

Because neighbors, policemen and teachers are overwhelmed with answering the many Uyghur children in the Chinese border region of Xinjiang in a reasonable manner, the Chinese authorities are providing the adults with arguments.

You should say: No need to worry, the parents are on their way to “further training”. The government is helping them to protect themselves from the "virus" of religious extremism and terrorist ideology. The children themselves should keep quiet because that would do themselves and their parents a great favor.

This argumentation aid can be found in a package of internal documents that contain the New York Times and the investigative journalists' network recently got leaked.

It confirms what the Beijing government has always denied until recently: over the past three years, hundreds of thousands - probably well over a million - Uyghurs, Kazakhs and members of other Muslim ethnic groups in the camps in China's officially known as “vocational education and training centers” have moved to the northwest Xinjiang region has been jailed. That is around a tenth of the entire Uighur population.

In these “centers” they should learn to love China and its government, to the Han Chinese culture - and above all to learn discipline. And they should get rid of unwanted habits, such as reading too much in the Koran, praying too much, growing beards that are too long and veiling themselves too much.

Beijing's politicians no longer deny the existence of the internment camps, but reject any criticism of them as "meddling in internal affairs of China". And they argue with the fight against terrorism. In the past few years, extremists have carried out "thousands" of attacks.

"Disappearances", kidnappings and detention without a legal basis are not uncommon in China. The Communist Party (KP) is the law, the police, army and secret services are its agents.

This arbitrariness affects not only Uyghurs, but members of all ethnic groups, such as the Tibetans. But Han Chinese are also victims. The experience of the past decades shows - and everyone in China knows this: Nobody is safe.

On the way to a totalitarian nightmare

But what is currently happening in Xinjiang is another step on the road to a totalitarian nightmare. Even if there is resentment within the administration, as is shown by the fact that the internal documents have been made public, there is apparently no one at the moment who can or wants to stop the mass imprisonment.

This text comes from the taz on the weekend. Always from Saturday at the kiosk, in the eKiosk, with a practical weekend subscription and on Facebook and Twitter.

Those who are only halfway in their political minds have to ask themselves how it can be that the politicians in Beijing and their governors in Urumqi can seriously believe that they are reaping something other than hopeless anger, deep hurt and violent aggression in an important region of their country when they lock Uighur women and men, old and young, behind barbed wire?

What if they stick “I love China” in Chinese characters and red paper hearts over their beds? What if they force inmates to perform traditional dances for television? If they are told to distance themselves from their beliefs and customs and instead declare their admiration for the party and its leader. What if, in the meantime, they send Han Chinese neighbors and officials into the apartments of Uighurs so that they can report on their books and pictures, cupboards and beds?

The answer: They don't care at all. The generation in power today saw its youth during the Cultural Revolution of the 1960s and 1970s, when denunciations, torture and mass campaigns were the order of the day. Xinjiang was a place of exile - as for the father of the artist Ai Weiwei, the poet Ai Qing.

Beijing sent settlers and soldiers from central China to the deserts and valleys of Xinjiang as early as the 1950s in order to win new territory with the military-led "production and reconstruction corps" and at the same time to pacify reluctant Uyghurs.

Subdued optimism after the Cultural Revolution

During my time in China I visited Xinjiang several times: first in 1980, when I was invited to a family wedding of a Uyghur student in Urumqi. At the time, Mao Zedong had only been dead a few years and the Cultural Revolution had only recently ended. No one was forced to cut their hair, eat pork, or bow to portraits of Mao. The first mosques were allowed to reopen, and melons, raisins and nuts could be bought in the markets.

The city was poor, skyscrapers were not yet reaching the sky, I saw women in brightly colored dresses in the streets - but none of them wore hijab or veil.

Han Chinese neighbors were not invited to the festival. Both ethnic groups lived side by side. The mood was mutedly optimistic: in Beijing in the 1980s, more liberal party functionaries - including the father of today's Communist Party leader Xi - were in power who advocated respectful treatment of the ethnic minorities.

Twenty years later the optimism was over. On July 5, 2009, there were bloody clashes in which Uyghurs suddenly attacked Han Chinese with machetes and knives. The next day, Han Chinese took revenge on the Uyghurs, 200 people died on those days. Most of them were Han Chinese migrants who now made up the majority of Urumqi's population.

The city had changed tremendously: wide streets, skyscrapers, shopping centers, omnipresent police checks - and many heavily veiled women. The atmosphere of mutual distrust and fear of new attacks was palpable.

At that time I was a China correspondent and spoke to a young Uyghur woman on site, fully veiled in a bright yellow cloth. Her former Chinese boss had forbidden her to dress like this. So she had given up the good administrative job and now worked in a small telephone shop. She was angry and scared.

In the evening a group of well-dressed men sat over shashlik in a garden restaurant. They were traders, they reported - although they had to hand in their passports because the authorities did not want Uyghurs to travel to Pakistan or anywhere else in Central Asia. Now their Han Chinese competitors have taken over the business; they could travel without any problems.

The situation has worsened since then. Politicians like today's Communist Party leader Xi Jinping grew up with the conviction that only those who are stronger and tougher than the others will survive politically. And they firmly believe that Han Chinese, with their alleged 5,000-year history, are intellectually and culturally superior to other ethnic groups. That is why they have to educate and discipline the supposedly backward ethnic groups.

This deeply paternalistic view of minorities is widespread in the official historical image, in museums, films and in everyday life. The party leadership is apparently so caught up in its political paranoia that it doesn't care if Hong Kong and Taiwanese stare with shudder at Xinjiang.

What makes the situation of the Uyghurs even more desperate is that they have no support from the majority of China's population. Serious public debates about how the majority Han Chinese society (over 90 percent) should deal with its ethnic minorities is taboo. There is no general understanding of how conflicts over land, business, posts and jobs can be resolved fairly so that coexistence works better.

Xinjiang is a huge, resource-rich region - but the important industries and offices are in the hands of the Han-Chinese dominated CP. Their boss is more powerful than any governor.

Uyghur intellectuals who wanted to lead such debates and seek ways out are now imprisoned for “separatism”, such as the economics professor Ilham Tohti.

On the other hand, only a few Han Chinese - with the exception of the writer Wang Lixiong - have been seriously interested in the history of Xinjiang and the life of the Uyghurs.

The government is betting on total intimidation

The government is relying, and not just in recent years, on total intimidation. Some Uyghurs respond by withdrawing to a more conservative or more radical Islamic community.

Under the motto "Close your eyes and ears" and with the excuse "Change through trade", the VW managers decided in 2011 to approve the construction of a factory in Urumqi, which was forced by the Chinese authorities. The treaty even provides for cooperating with the People's Armed Police, like that Southgerman newspaper reported.

The VW people also accepted that one of their managers was arrested after a Green MP asked critical questions in 2012.

Like the VW people, Siemens and BASF managers who have plants in Xinjiang have to be asked how they want to react to the latest events. Keep looking away?

Can you protect your Uighur workers from being transported to these camps? Have you ever tried? If not, there is only one answer: German companies have to get out of Xinjiang.