Why does snow fall

At what temperature is it too cold for snowfall? 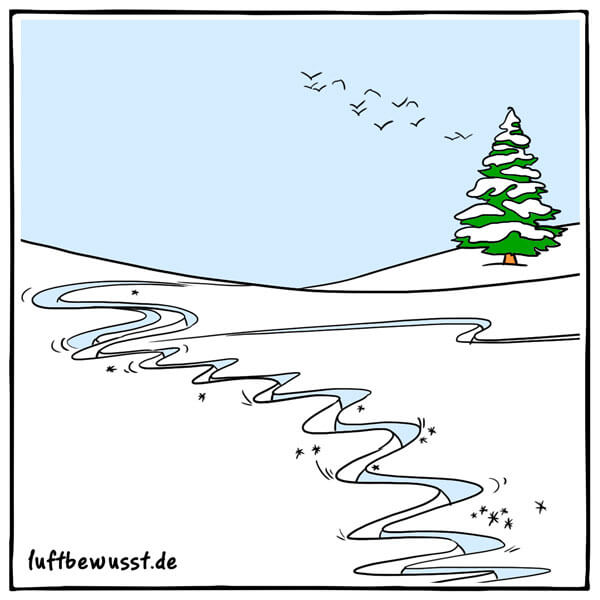 Does it still snow below minus ten degrees Celsius? When is it too cold for snow? Why is there so much snow in Antarctica when it supposedly stops snowing when it's below freezing temperatures?

These questions are hotly debated again and again in countless forums and blog posts on the Internet. While the scientific answer is clear, there is clearly a need for clarification. In order to give an understandable, comprehensive answer to the question, we have evaluated and summarized many different sources on this topic. One can clearly say: It's never too cold for snow on our planet earth! It can still snow even at the lowest freezing temperatures.

But it is also a fact that in many regions it snows very rarely when it is extremely cold. How temperature and snowfall are related and what distinguishes Germany from Antarctica is answered below. Let's start with the question of what has to happen in order for it to snow.

How is snow made? What has to happen for it to snow?

Water is constantly evaporating from the soil, plants and bodies of water. The higher the temperature in the air layers close to the ground, the more water evaporates. The resulting water vapor rises into higher, ever colder layers of air. There the vapor condenses on tiny particles, so-called aerosols. This means that small droplets are formed. If the temperature in an air layer is less than minus 20 degrees Celsius, the droplets freeze to ice.

Large and dense collections of such water droplets or ice crystals are visible to us as clouds. At some point so much water collects in a cloud that it becomes too heavy and the air can no longer hold the droplets. (Everyone knows that…… The cloud is saturated and it discharges the water in the form of precipitation.

Whether the precipitation arrives as rain or snow depends on the temperature of the air layers below the cloud. If the air there is too warm, the ice crystals thaw on their way to earth and there is rain. It can still snow at plus five to seven degrees Celsius, whereby such precipitation usually shows itself in the form of sleet or very damp, muddy snow.

If it is cold enough, the ice crystals remain frozen and arrive at us as snowfall. During the fall, more and more ice crystals hook into each other and together form the well-known hexagonal snow crystals, which look like fantastic works of art under the microscope.

So many factors play a role in whether it snows or not. The basic requirement, however, is that enough water evaporates and the "water reservoirs" in the clouds are regularly "refueled". The relatively warm, humid air masses then have to be cooled by colder air masses.

Why is it never too cold for snow?

The colder the air, the less moisture it can absorb. At zero degrees Celsius, one cubic meter of saturated air contains around 2.7 grams of water, at minus 40 degrees Celsius it is only 0.07 grams, i.e. around one fortieth of the amount at freezing point. (Source) At such low temperatures the air is extremely dry, almost all of the humidity has condensed: it has deposited as an egg layer, for example, or has already fallen elsewhere as precipitation.

The conditions for water to evaporate and form clouds as water vapor are therefore extremely poor at icy temperatures. We can see: The lower the temperatures drop, the lower the likelihood that it will snow.

But it can still snow, it's not absolutely too cold for snow. There is always a certain amount of humidity, however cold it may be. Therefore, there is always the possibility that it will snow. Even in Antarctica.

Why is there so much snow in Antarctica?

If the chances of snow fall in freezing cold, why is there so much snow in Antarctica? Is not that a contradiction? No, not at all. It snows very, very rarely in Antarctica.

From a purely visual point of view, Antarctica and Sahara don't have much in common. Nonetheless, both are deserts in terms of climate. The Antarctic is a so-called cold desert. There is extremely little precipitation there, every year only a very thin layer of fresh snow is added.

The snow falls mainly in the milder coastal areas on the edge. There, sea water evaporates, which, as it cools in higher air layers, returns to earth as snowfall. 80% of the precipitation occurs in this way. The rest of the snowfall is caused by water vapor inland, which does not even rise into high layers of air but rather quickly condenses into ice crystals. (Source) (The direct transition from gaseous water vapor to solid ice is called sublimation.)

The fact that the Antarctic has so much snow is simply because the existing snow never thaws because of the permanent frost. A little bit of snow every year, collected over many thousands of years, results in quite a lot!

Why does it rarely snow here when the temperature is below zero?

Then where does the phrase "too cold for snow" and the opinion of many people come from that it can no longer snow when it is below zero? If you only look at the weather in Germany or Central Europe, this phrase is not that wrong. Here it can actually be observed that it snows mainly at temperatures around freezing point, between plus three and minus three degrees Celsius. When it gets colder, it rarely snows.

This phenomenon is due to the geographic location of Germany. Once again to remember: In order for snow to develop, warmer, humid layers of air must be cooled by very cold ones. Due to the special climatic conditions in Germany, however, it rarely happens that such air masses come together.

Our temperate winter climate is mainly influenced by two air currents. First, from the Atlantic air current from the west, which brings milder, more humid air to us. Second, from the continental from the east, which brings cold and dry air from the mainland. Low pressure areas over Germany lead the Atlantic air to us. This has an effect in mild temperatures around freezing point and changeable weather conditions, during which it snows or rains more frequently.

In order for it to get really freezing cold in Germany, a sustained high is necessary, which will blow cold air from the east to us over a longer period of time. Only then do we have temperatures of minus ten degrees and more. At this point, however, the warmer, humid air from the west was completely displaced and our air is extremely dry. There is no more water to form snow. The probability that it will snow is very low due to these special climatic conditions. It's really colloquial as "too cold for snow".

In other climatic zones of the world, where warm and very cold air masses meet more often, this statement does not apply. And using the example of Antarctica and other polar regions, it can be proven beyond doubt: It is never too cold for snow.

Worth reading from the magazine: