How happier are we than our ancestors

Happiness atlas
money alone does not make you happy

Science confirms what the vernacular always knew. But what is it that makes Germans happy? A conversation with Bernd Raffelhüschen, co-author of the "Glücksatlas 2014".

Mr. Raffelhüschen, how do you actually measure happiness?

You can't measure happiness. If you go through the traffic light when it is red and do not get run over, then you are lucky. What we as scientists measure is people's subjectively perceived satisfaction, which is colloquially equated with happiness.

The happiness atlas 2014 says that Germans are on average more satisfied today than ten years ago. However, satisfaction has only grown slightly since 2010. The Germans remain on a high “satisfaction plateau”. Have we reached the limit of happiness?

No, but satisfaction is not a steadily growing quantity either. It fluctuates due to various factors. But it's true: in the last ten years, satisfaction has risen the most in Germany. We are as rich as never before in Germany. If people had suspected 100 years ago what it looks like in Germany today, they would probably have spoken of a paradise. But subjectively, we are probably as satisfied today as our ancestors 100 years ago. 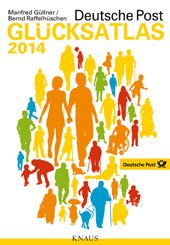 The four big "Gs" of luck

Money plays a role, of course. What is my fortune? What equipment does my home have? But that's just one factor. We are talking about the four big Gs of happiness: money, health, community and genetic disposition, i.e. a person's character. These factors determine the degree of satisfaction or dissatisfaction. If we look at Germany with its increasing prosperity and good health care, then it is understandable that the people here can be satisfied and live well.

Do the statistics also indicate which of these factors is most important for subjective satisfaction?

We can only speculate. But the numbers tell us about certain regularities. Healthy people are always more satisfied than sick people. Someone who plays sports is happier than someone who doesn't. Homeowners are also generally more satisfied than tenants. Health or the residential area also have an impact on social life. That means, depending on where I live and how often I come out of the house, I have the chance to maintain social contacts that make me happier. If, on the other hand, I live in a socially deprived area, my options are more limited.

One focus of the current happiness atlas is inclusion. How satisfied are people with disabilities in Germany?

They are significantly more dissatisfied than the general population. However, a distinction has to be made between age-related disabled people, for whom the right care is more important, and younger people with a disability. The boys want to participate in life and benefit from better conditions in school, at work and in public life. But even with them, the mentality plays a major role: the disabled, who approach their life on their own initiative and self-determined, is more satisfied than the average German.

Life is happiest in the north

According to your statistics, the lucky strongholds are in northern Germany. The happiness atlas has been collected since 2011 and Schleswig-Holstein and Hamburg are always at the forefront. The most unhappy Germans, on the other hand, live in Brandenburg and Saxony-Anhalt. How do you explain this north-east divide?

The regional differences are to be treated with caution, but between the northern and eastern German federal states they are really significant and also measurable. For years, the north with Schleswig-Holstein, Hamburg and Lower Saxony has always taken first place. With Hamburg we can understand that: It is a functioning city-state with the best health care and home to many wealthy people. In Schleswig-Holstein, on the other hand, there are relatively many unemployed and the incomes are rather low for a western German state ...

... and yet the state is number one in the happiness atlas.

Exactly. Objectively, Schleswig-Holstein would have to be below along with the eastern German states. We explain this with the north German mentality. Apparently the people there make themselves comfortable with less material goods and are therefore more satisfied. Perhaps this frugal disposition is also an "infectious disease" from northern Europe: According to international studies, Denmark has been home to the happiest people in the world for years.

You come from Schleswig-Holstein yourself, but now live in Freiburg in the state of Baden-Württemberg. How is your satisfaction?

(laughs) I am absolutely satisfied in southern Germany. But of course it's true, I'm also very happy when I go north to my Wadden Sea and my dykes again. But the question is scientifically interesting. A recent study in Denmark wanted to find out whether Danes live happier at home than abroad. The results showed, however, that the Danes living abroad are similarly satisfied and actually simply take their mentality with them. 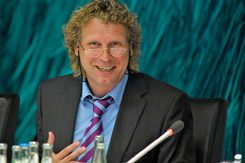 © Bernd RaffelhüschenProf. Dr. Bernd Raffelhüschen is co-author of the "Glücksatlas 2014" on behalf of Deutsche Post AG. As a professor of finance at the Albert-Ludwigs-Universität Freiburg, he conducts research on financial and socio-political aspects of demographic change.