The rarity of diamonds is a myth

Secret of the giant diamonds revealed

Precious rarities: large diamonds such as the Koh-i-Noor or the Cullinan diamond are not only very rare - they also emerged very differently from other diamonds. They formed hundreds of kilometers deeper in the earth's mantle and in cavities filled with liquid metals. This, in turn, sheds completely new light on the composition of the deep earth's mantle, as researchers report in the specialist journal “Science”.

In principle, diamonds are nothing more than carbon compressed under high pressure and heat. Most of them were formed at a depth of around 150 to 200 kilometers in the earth's mantle and were then carried into the earth's crust by primeval volcanoes. The remains of these chimneys are preserved as kimberlite rock and are mainly found in South Africa, India, South America and even in the Antarctic.

However, while small diamonds are quite common, large and pure diamonds of several hundred carats are a real rarity. These include the world-famous Koh-i-Noor and the Cullinan, discovered in South Africa in 1905. As a rough diamond, it weighed more than 600 grams - that's a good 3,000 carats.

But their size is not the only special feature: "Such diamonds are usually particularly poor in inclusions, relatively pure, contain very little nitrogen and are often irregularly shaped," report Evan Smith from the Gemological Institute of America and his colleagues. Because of these characteristics, geologists have suspected for a long time that these diamonds could represent a very special type and that they were formed differently than the "normal" smaller gemstones.

However, it has not yet been possible to clarify whether this assumption is correct and how and where these diamonds were formed. Now, for the first time, Smith and his colleagues have gained more insight into the secrets of the largest and most famous gemstones on earth. For their study, they examined the residues and their inclusions left over from grinding and cutting 53 such large large diamonds. 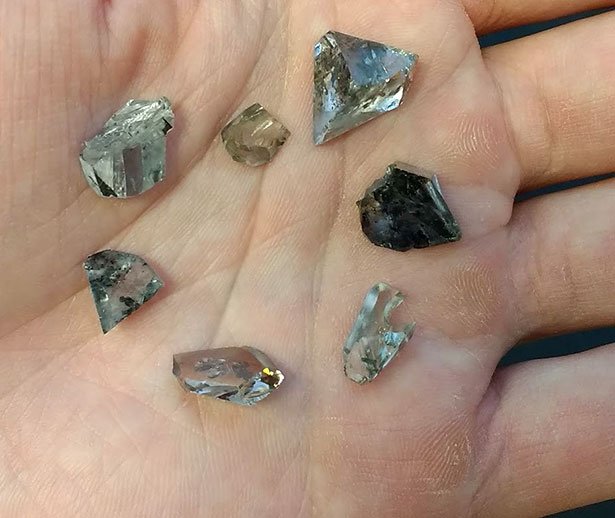 The researchers analyzed remnants of the large diamonds that were left over after cutting and grinding. © Evan Smith / GIA

The surprising result: the diamond inclusions, previously thought to be mostly graphite, are actually made of metal. Many contained the mineral cohenite (Fe, Ni)3C, a compound of iron or nickel and carbon that only occurs in meteorites or in the earth's mantle below 120 kilometers. In addition, there were proportions of a nickel-iron alloy, iron sulfide and traces of liquid methane and hydrogen.

The special thing about these metal inclusions is their elementary, non-oxidized form, as the researchers report. "We interpret these inclusions as remnants of a melt of iron, nickel, carbon and sulfur with small amounts of dissolved hydrogen, phosphorus, chromium and oxygen," said Smith and his colleagues. "This speaks for a reducing environment."

In the depths at which the “normal” diamonds are formed, however, these conditions do not exist; there is too much oxygen in the rock. Cullinan, Koh-i-Noor and the other unusually large diamonds must therefore have originated deeper in the earth's mantle. "Our results suggest that these diamonds formed in the transition zone of the earth's mantle at a depth of 410 to 660 kilometers," say the scientists. 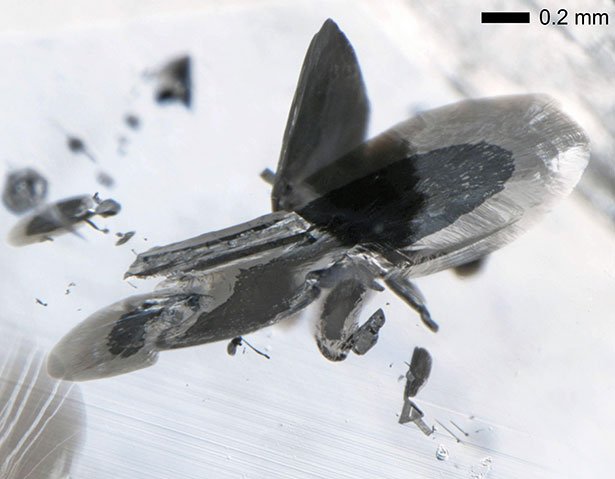 Also different and unusual is the way in which the rarities among the diamonds were formed. Geologists have long suspected that the Earth's mantle contains inclusion bubbles made of liquid metals at depths below 250 kilometers. Elemental carbon could be dissolved in this molten metal - and thus the building material for the diamonds. However, the existence of such metal “bags” has not been proven - until now

For the first time, the metal inclusions in the diamonds provide evidence that such bubbles of liquid metal actually exist in the Earth's mantle - and that the large gemstones were created in such bubbles. “Such a liquid bag gave the large diamonds space to grow unhindered despite the high pressure,” the researchers explain. The gemstones were formed from the carbon that crystallized from the molten metal.

The results prove two things: On the one hand, they confirm the assumption that there are deep earth mantle zones with strongly reducing conditions and liquid metal alloys. On the other hand, they show that the rare giant diamonds were actually created in a different way and in different places than their smaller counterparts.

"This new understanding of these large, Type IIa diamonds solves one of the great mysteries in the history of diamond formation," explains Smith. "At the same time, the existence of metallic melts in the earth's mantle is of far-reaching significance for our understanding of the processes deep inside the earth." (Science, 2016; doi: 10.1126 / science.aal1303)